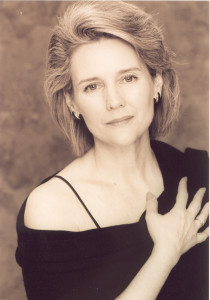 A great song connects with each person in a special, personal way, and I want you to feel that connection.  Ask yourself--- “What does that song mean and how does it make me feel?”  That's what's important.  So I invite you to explore with me the meaning of the songs I sing.

I began my professional journey as an actor and singer at the age of 15 in summer stock.  After graduating college, majoring in theatre and speech, I worked in theatrical and operatic productions in New York City.  I was cast as a principal in the improvisational hit, The Proposition, performing at The Manhattan Theatre Club and in its National Tour.  I originated the leading role of Mrs. Hodson and performed in the NYC debut of The Lodger - a musical based on the Jack the Ripper serial murders, that was well received by critics.  In opera I sang the roles of Papagena in The Magic Flute and Zerlina in Don Giovanni with New York City’s Stuyvesant Opera Company, and performed alongside such performers as Richard Tucker and Placido Domingo in New Jersey State Opera Company productions.  Other roles range from Hedy LaRue in How to Succeed  and  Jacques Brel is Alive and Well and Living In Paris (both regional), to industrial films and over 250 television commercials (for such companies as American Express, AT&T, Johnson & Johnson, Proctor & Gamble),  as well as appearing in soap operas All My Children and One Life to Live.

I work throughout the greater New York metropolitan area and am a proud member of SAG/AFTRA, AEA and MAC (Manhattan Association of Cabarets).